Beer: from necessity to pleasure

Beer: from necessity to pleasure 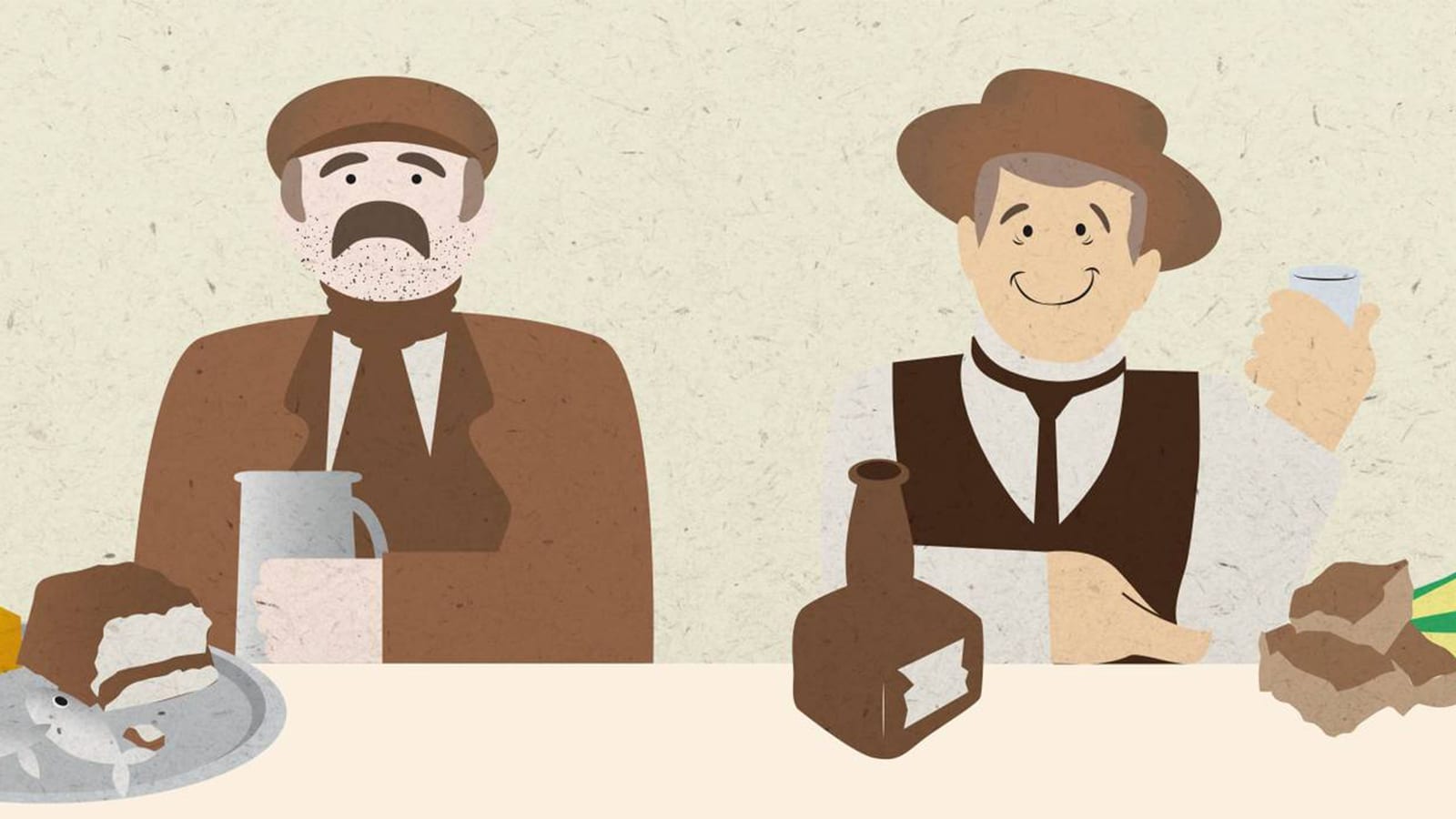 People used to drink beer so that they didn’t die.

You’ve probably heard the line about beer being safer to drink than water. It’s true because brewing involves boiling the water, thus killing harmful bacteria. But people could’ve just boiled water to make it safe, and that’s significantly easier and quicker than brewing beer. So there was more to it than safety.

Beer bests water because it contains calories, minerals, vitamins, and, importantly, flavour, plus, by turning grain, water and hops into beer, it was a way of preserving those ingredients and making them last longer. These were important considerations hundreds of years ago.

Beer was a basic necessity. In the early 1800s, the British working classes in London drank Porter, a robust beer of about 6% ABV, aged in huge vats, tasting roasted, rich, smoky and tart. It was a beer for sustenance, not refreshment, and it was consumed steadily through the day. For food, they ate a grain-heavy diet of mostly dense bread, perhaps with some other important preserved foodstuffs like cheese, smoked fish, or a scrappy, fatty piece of bacon. Beer added flavour to the bland diets and gave more digestible calories – it was a liquid bread.

North America in the early 1800s was, by contrast, a greedy drunken riot. Most people farmed and corn was the staple product: they ate the corn in many forms, like breads and pancakes; corn was fed to pigs, which they then ate, mostly smoked or salted, while they fried everything in pig fat; excess corn was distilled into whiskey, a drink that was strong enough to cut through the fatty food. And they drank a lot of whiskey (but no beer) – in the early 1830s, per capita consumption of pure alcohol was an astonishing 27 litres, three-times higher than today’s amount.

These were diets of necessity and availability. Alcohol was important for its healthfulness but also because it’s a social drink, and the pub or saloon became an escape from the hardships of life, a place which provided comforts which working class homes didn’t have: lights, heating, social warmth, conversation, entertainment, cheap alcohol. The social connection to beer was psychologically important and it would forge future drinking cultures.

Arguably the most important historic change for beer drinking was when municipal authorities built and provided safe supplies of drinking water, which happened through the middle of the 19th century. It meant that beer shifted from being a basic necessity and could become a social, recreational drink. Meanwhile, the Industrial Revolution led to more jobs and urbanisation, which necessitated changes to the food supply system.

Early in the 19th century, farmlands on the edges of the city grew the food and farmers physically carried it into the city, or in the case of animals, walked them into the city. The growing populations led to the development of a food system with merchants, dealers, markets and shops, and with it, food became a commodity. It also saw improved diets of people in cities because of the increased choice and variety and there was more availability of fresh fruit and vegetables.

The beer choice changed, too, and the old London Porters were replaced by milds and pale ales, which were fresh, refreshing and bitter, not vat-aged, vinous and calorically dense. Drinkers were more demanding now because they wanted beer, not needed it, and they wanted better-tasting beer.

While beer was integral to British culture, it took beer a few decades to become the drink of Americans. To begin, in the 1840s and 1850s, beer was a drink made by German immigrants, and drunk by them. Their Bavarian-style malty-sweet low-alcohol lagers were initially a source of curiosity and ridicule to the liquor-drinking Americans, but the shift from rural farm work to urban factory work led to changes in diets which helped turn the nation into lager lovers.

Saloons were the central social space for the working classes and an important institution was the free lunch. Anyone who bought a 5-cent glass of draft lager could help themselves to a buffet of meat, pies, potatoes, eggs, bread, cheese, soup. It wasn’t great food, but it sustained much of working-class urban America and it gave them a greater appreciation for beer. But the American palate was different to the German one, and Americans came to want something other than the sweet German-style lagers. The result saw brewers adding maize or rice to their grain bills to create a lighter, drier drink, and sales grew as more Americans drank more beer.

By the 1880s, brewing was one of America’s leading industries, responsible for many technological advances which had changed the production of foodstuffs there and around the world: railway networks now spread around countries making transportation easier; steamships could transit produce and people around the world, bringing new foods and cultures; machines now made everything in big factories; assembly-line bottling halls increased output and meant food and drink could be shipped further away; artificial refrigeration helped meat, dairy and beer to stay fresh and travel further; grocery shops started selling packaged foods instead of raw ingredients; chain stores opened; advertising became increasingly important as brands developed, especially those who were growing into nationally-known companies, like Heinz, Campbell’s, Coca-Cola, Quaker Oats, Anheuser-Busch, Bass, Cadbury’s and Rowntree. Food and drink were more available and more diverse than ever before – and big brand dominance had begun.

Drinking choices evolved by the end of the 19th century. No longer was it just beer and a distilled spirit, and people could afford tea, coffee, cocoa, canned fruit juices, pasteurised milk, plus bottled soda, root beer and ginger beer. The prominence of sugar now shifted the palates and diets of a lot of people, as calories from sugar dramatically increased in place of calories from corn, wheat and potatoes.

Calorie consumption actually decreased overall from the end of the 1800s to the middle of the 1900s in North America, thanks to less labour-intensive work, less exposure to cold (because of home heating), and more nutritionally-dense food, but calories have since risen steadily and that marked a shift in consumption from the 1950s onwards.

The 1950s was a decade that left behind the past and looked to the future. The 1960s can be defined by fridges, freezers, televisions, cars, supermarkets and suburbanisation; by 1971, half of British households had a car, 69% had a fridge, and more households had a TV than an indoor toilet. These were major social changes and each impacted the other, and impacted what we ate and drank.

These major social changes impacted what we ate and drank

Convenience was important now. We bought ready-made meals, canned sauces, cake mixes, frozen vegetables, tinned fruit, and sliced white bread. Cupboards were filled with household brands. Foods became more processed, using increasing numbers of ingredients to make it taste of less. The 1970s was the decade that fast food chains became ubiquitous and it appealed to people who had more disposable income and didn’t want to cook. We ate bigger portions with more calories and less nutrition, and homogenous national palates became dominated by the big brands. That’s not necessarily a critique; it’s just how things were.

All of this naturally allowed mainstream lager to become the everyday beer – it fitted with the rest of the culinary and cultural zeitgeist: affordable, recognisable, trusted, brightly advertised, and a uniform blandness that people came to see as normal and desirable.

British beer changed through the 1960s and 1970s as it went from being regionally varied and all sold as cask ale, to kegs of carbonated ale and then to more and more lagers on tap and in bottles. With more leisure time, our pub-going decreased, and we bought lager from the supermarket to drink at home.

Into the 1980s, further lifestyle changes saw people starting to exercise more, and they became more aware of dieting and diet foods. Light beers started to grow in popularity and they’d come to dominate the American market (Bud Light and Diet Coke were released within a few months of each other in 1982). But not everyone was enjoying the fast food and mono beer culture.

The mid-1980s were a catalyst to move back towards seasonal, fresh eating, and saw the nascent growth in small breweries. It took a long time – it’s still ongoing – but it happened and we started to taste things again. Beer had always been a social drink; now we were enjoying it for how it tasted, not just how it made us feel. Food started to be more of a pleasurable leisure activity, too, where we specifically sought new things, we went to new restaurants or countries, and started cooking more diversely, often inspired by food media and cooking shows on TV.

Now we were enjoying beer for how it tasted, not just how it made us feel.

There are two contemporary beer trends of note alongside a general move towards drinking local, fresh and independent. One is primarily important to the North American market, though we’re seeing it in the UK, and that’s for beers specifically brewed to be around 100 calories. It’s the craft light beer, but one with flavour: micro IPAs, session sours, beers functionally designed for post-exercise refreshment, and they glow with a perceived health benefit (or at least make beer feel more wholesome). The opposite of these seems to be a consequence of the over-abundance of modern life. We’re saturated with media, colour, noise, flavour, and Double IPAs, Imperial Stouts, and fruited Sours have become powerful liquid experiences. We open them to be impressed and excited by them, and perhaps to show off on social media, a new technology that’s having a visual impact on what we drink.

There was no variety in beer and food for the working classes 200 years ago, and beer was a basic necessity which helped to keep you alive. Through social and technological changes, beer drinking became something done primarily for pleasure, but through the 20th century it became commoditised, homogenised and dominated by international brands. Now beer fits into a culture where we can choose what we want, when we want it: on-demand TV that’s never off; any song we want on the device in our pocket; cuisines from around the world delivered to our doors within an hour; and every beer we could ever want, and more – beers which can enrich our lives, rather than simply save them.