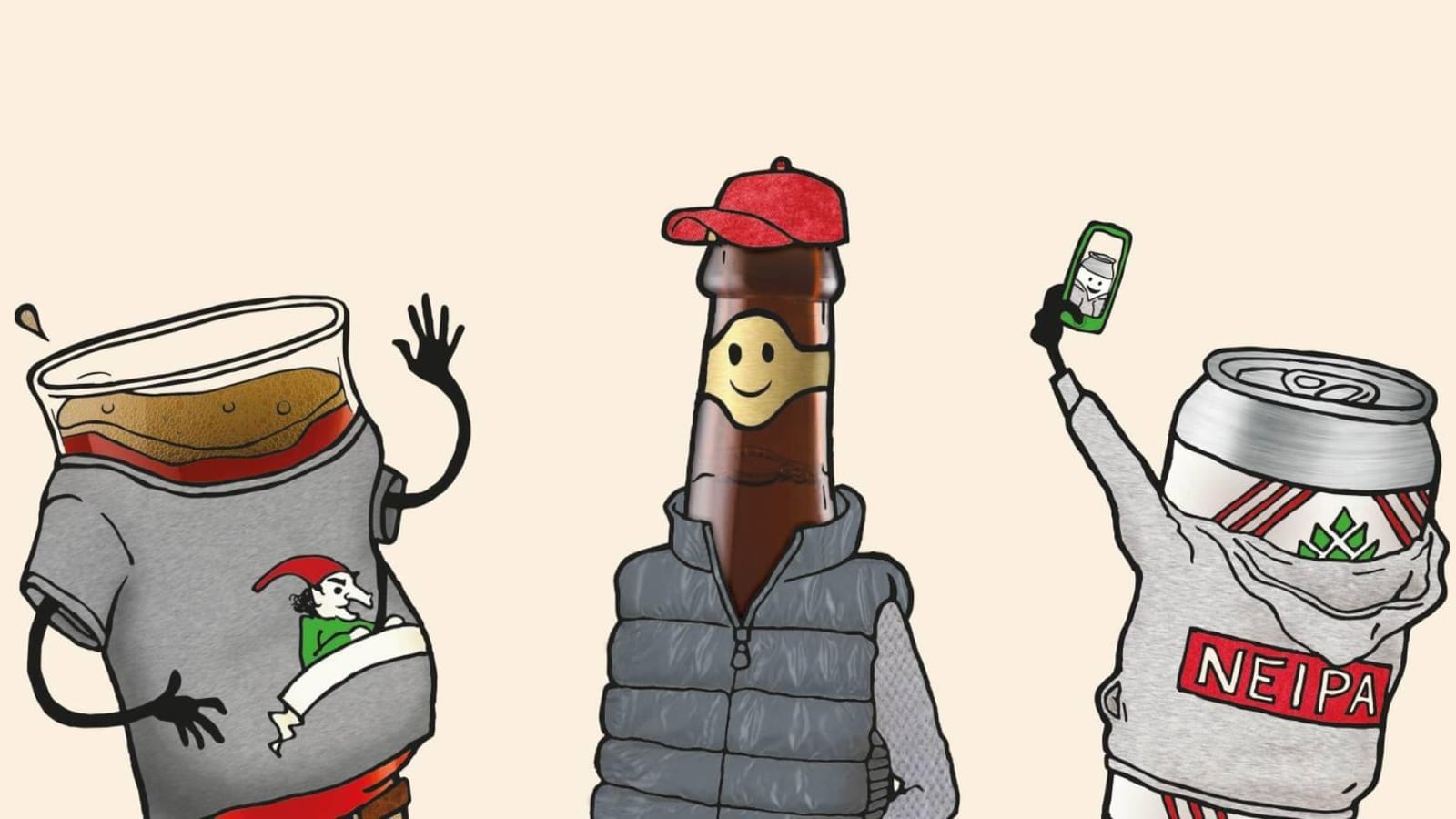 Boring. Brown. Twiggy. Dull. These are the words you’ll hear beer geeks use to describe Britain’s traditional beer styles, despite being the inspiration behind everything they drink today.

For many British beer fans, our brewing heritage is of little interest. We’ve become so far removed from the flavours of amber malt and native hops that we often don’t even regard breweries that use them as craft. The last decade has been all about the bright lights of American hops, the citrus smack of sour beer. But it’s not just about the lack of dry hop or a late addition of fruit puree. For many beer geeks, bitter and mild still conjure images of socks, sandals and beer bellies. In the UK craft beer wasn’t just a reaction against macrolager, it was a reaction against the boring, the brown, the twiggy and the old.

Recently, though, there has been a remarkable increase in interest and production of classic British styles. Breweries famous for their hazy beers like DEYA Brewing Company, Boxcar Brewery and Northern Monk have all released variations on bitter, mild and golden ale. They may still come in tallboy cans with inscrutable names, but the liquid is inspired by recipes older than the people drinking it. Meanwhile, Five Points Best – a dark amber bitter made with 100% Fuggle hops – has become the darling of many beer writers, who now inundate editors with pitches about Harvey’s, Timothy Taylor and St Austell (sorry about that).

So what’s behind this movement? Given the dominance of IPA, part of it can be put down to a search for variety – the goal that has underpinned craft beer from the start. The real question is why traditional British brewing, and why now? Overall traditional British brewing is in serious decline. Cask ale volumes have fallen 23% in the last four years, and yet within our little bubble it’s on the rise. For a full picture, we’ve got to look outside the beer bubble, and at the world of fashion.

We’ve got to look outside the beer bubble, and at the world of fashion

The last few years have seen the incredible rise of streetwear – comfortable, sporty clothes dressed up and branded big. We’ve seen start-ups like Supreme elevate everyday tracksuits, hoodies and trainers to the point that people queue up to buy them. It was affordable fashion, born in the grassroots of Instagram and valued by scarcity rather than longevity, which made it very hard for the bigger fashion houses to keep up.

If that sounds familiar, it should. The brewing world took the everyman, sippable IPA and juiced it up to NEIPA, making it more approachable and Instagrammable. Happily, the process and amount of hops used also made it expensive and hard to get right, as well as giving it a short shelf life. Then those breweries asked people to queue: they told us it was running out, and they swore they’d never make a beer this big again. Whether it was intentional or not, craft beer was mirroring the fashion world.

But as the saying goes, fashion is fleeting. Designers and fashion lovers are now reacting against that endless chase for the new, against the queues and scarcity, and against the hyper modern look in search of something more down-to-earth.

Normcore fashion embraces practical, no-nonsense clothing, usually designed for the outdoors. It’s walking boots and thick socks, gilets with pockets and warm fleeces. It’s Chris Packham, or Jeremy Corbyn on a day off. Like streetwear it puts an emphasis on comfort and practicality, but unlike streetwear it often puts it above the aesthetic. Doing so is a rejection of recent fashion, as Former GQ fashion editor Nick Carvell explains.

“Clothes with massive logos were once the height of desirability, but that’s going away now,” he says. “We’re seeing people really value the sustainability and workmanship, not drops and logos. In times of economic uncertainty people look for things that feel a bit more safe. It’s not nostalgia, it’s what feels real.”

The parallels and potential consequences are clear. Tired of the endless quest for the newest beers – accentuated by the pervasive ticking culture – many beer drinkers have started to see the appeal of beer that escapes that race. Not only do traditional British styles bring relief from the palate smash of American hops and liver assault of high ABVs, but choosing a classic Best Bitter is devoid of the fashion anxieties, just like pulling on a comfy sweater. That’s coupled with the powerful connection these beers can have to our heritage and indeed our families.

“Drinking bitter is what got me into beer in the first place,” says Attic Brew Co cofounder Oli Hurlow. “I’m from the West Country originally and grew up on Butcombe, so that will always have a special place in my heart. We’ve brewed a couple of milds so far because it has real value for our customers, be that because they remember their dad in the pub with a pint of M&B or just because they taste great pint after pint.”

This new trend isn’t just about shared history, it connects us to our landscape too. American hops have naturally dominated the craft beer scene, but there’s now a movement towards using British varieties, too. While some cultivars have been crossbred to create American levels of citrus and tropical fruit, there is a growing interest in more subtle, spicy and green tinged hops used for decades in mild, bitter and porter. DEYA Brewing Company has built a reputation on modern, hoppy beer but that doesn’t fully reflect founder Theo Freyne’s drinking habits or background.

“As a brewery we have really championed American hops,” he says. “But more and more I do feel a responsibility to champion British ingredients. We hope to have a small range of Best Bitter, ESB, Golden ale and Porter, and all of them will use all British ingredients.”

So variety pushed us to look at other styles, and our heritage was calling. Of course, there’s also the argument that craft beer was left with nowhere else to go. Brewers and writers often muse over where the next innovation and step change will come from. New England IPA was the latest, but again there was no clear way for breweries to set themselves apart. Sometimes looking back is as innovative as looking forward.

Sometimes looking back is as innovative as looking forward

Most modern breweries deciding to revisit classic British brewing have found the same thing, though – that it’s not easy to do. We often assume that getting big, bold and riotous flavours is the challenge in brewing, but in many ways the opposite is true. Treating these soft, subtle ingredients in a way that makes them exciting takes more skill than brewers might have admitted ten years ago. These brewers are also competing with regional breweries that have centuries of experience and rock solid recipes to draw on – not to mention breweries set up specifically to brew these styles.

“We tried our hand at a low-ABV bitter interpretation in our very early days, and never really nailed it,” says Brian Dickson, head brewer at Northern Monk. “I avoided getting involved in the whole ‘definition of craft’ debate, but at the time breweries such as Timothy Taylor were not included in these discussions very often. In reality they’d been leading the UK forerunner to ‘craft’ for so long before any of us got involved.”

Despite being unable to produce a version they were happy with, Northern Monk were adamant they wanted to champion the styles that were part of their origins. When the brewery opened its Manchester taproom, Dickson and founder Russel Bisset installed a Timothy Taylors Landlord line right next to their Ramen-inspired DIPAs and Arctic Roll pale ales. The move caused quite a stir, surprising some beer geeks who had never considered the beer craft and pleasing those who had always championed it. Northern Monk has finally produced a traditional bitter it’s pleased with, too. After years of trialling recipes, Dickson recently released his first ever Best Bitter in collaboration with Other Half Brewing, who had been on many a drinking session in cask-focused pubs while visiting Northern Monk.

Such a collaboration does point to the fact that regardless of what is inside the can, the craft beer market will always manage to drive that notion of exclusivity and scarcity sky high. So does this move to normcore beer really equate to a rejection of the hype model? Could the rise of traditional brewing among the new breed of brewer mean a shift in how we both buy and appreciate our beer? If fashion is any indication, probably not.

There’s a reason we buy things, and part of it is performative to society

“The problem with that is normcore itself is a trend,” says Carvell. “It’s a conscious choice to choose a fleece over something else, or someone else has chosen that design at some point for you. There’s a reason we buy things, and part of it is performative to society.”

Fashion houses have already begun to mimic Normcore ideals, designs and materials, and it’s become difficult to tell the difference between those who embrace the freedom of Normcore and those who spend thousands to look like they do.

Thankfully in beer, where the outlay is only a few pounds, to some extent it all equates to the same thing anyway—more choice. The important thing to recognise is that craft beer is not on an endless march with an end goal. The truth is more cyclical. Even if every time we go round we get a little bit better – a little more consistent, a little more diverse – ultimately we’ll always end up back where we started. This is normcore.