Steve and I recently visited BrewLDN which we found to be a great event especially for networking, putting faces to names and finding some amazing new beers to bring to the business.  It was a great opportunity to find some hidden gems and make new connections to take the business forward. 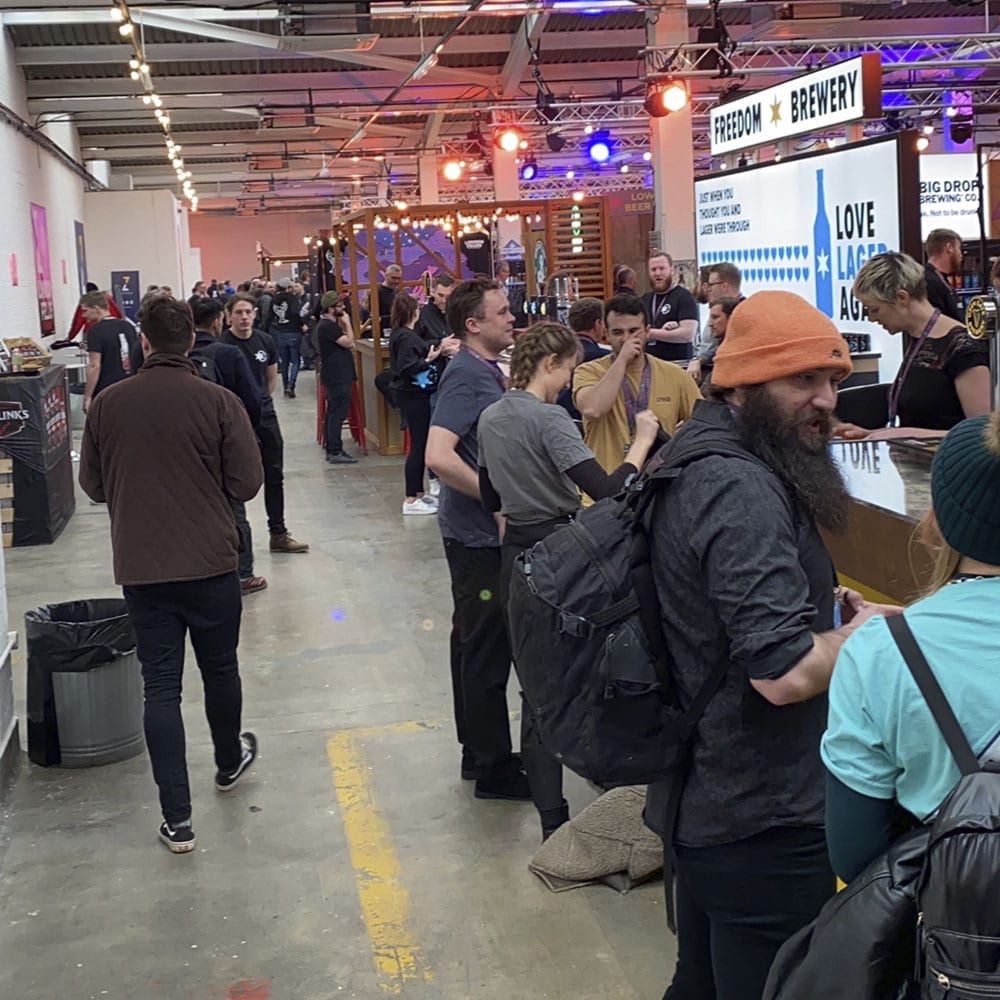 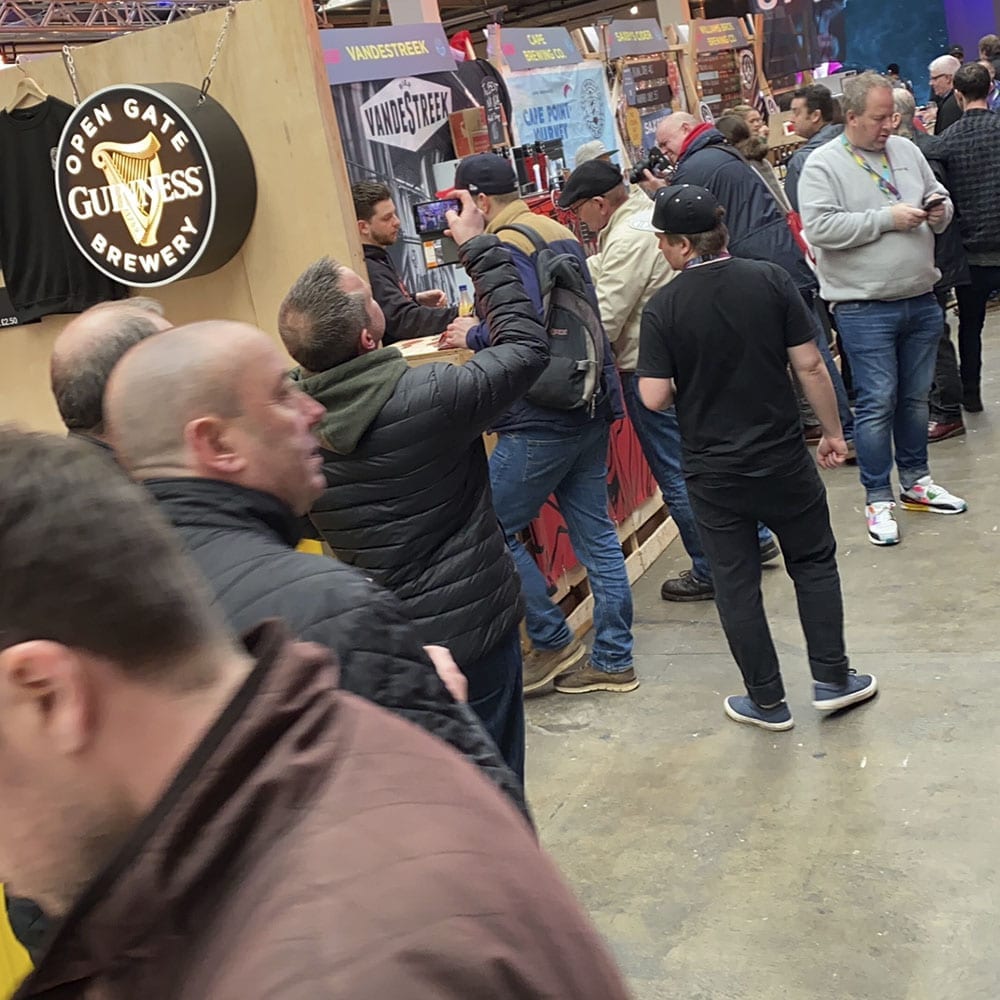 Skipping off kerbs, my destination is at last in sight, the smokestack of the old Truman Brewery guides my way to the party. For 322 years the neighbourhood of Spittalfield grew around this brewhouse. From its opening in that fateful year 1666, to its closure in 1988, it was the area’s largest employer. As the industry grew, the east end grew. Originally named the Black Eagle brewery, it became one of the worlds largest breweries under the ownership of Benjamin Truman.

With the creation of a heavy hopped, dark malt beer, named Porter by the landlord of the Old Last Blue, a Truman pub in Shoreditch, (on account that it was popular amongst the market porters) the mass production of beer began. Porter was the first beer that could be aged on site and dispatched in drinking condition immediately.

The site expanded quickly over six acres of malt and hop lofts, huge warehouses filled with copper vats for storing the porter that had made them internationally famous in the 18th century.

Such an impact the brewery made on London and the world, that Charles Dickens had the ever optimistic Mr. Micawber inquire about a job at the brewery in David Copperfield.

‘Look at Truman, Hanbury and Buxton! It is on that extensive footing that Mr Micawber, I know from my own knowledge of him, is calculated to shine; and the profits, I am told, are e-NOR—mous!’

Although Micawber failed to gain employment in the industry, his wife was not wrong. Proprietor Sir Benjamin Truman’s fortunes were such that he built himself a georgian townhouse next door, 91 Brick Lane, and commissioned Thomas Gainsborough to paint his portrait. This likeness hung in the wood panelled boardroom of the house until 1977, when it was auctioned off by its inheritors.

Since the painting left the brewery, it is said, Truman’s ghost stalks the halls, raging at what has become of his brewery. Workers started a tradition of leaving out a jug of Imperial Stout every evening to placate the angry spectre, and every morning the jug was empty.

Other stories have the ground floor haunted by a huguenot silk weaver. Sadly, nothing is known of his drinking habits.

I arrive in time for the trade session, sample glass and copy of Ferment in hand, I climb the staircase and head out into the giant hall holding over 150 brewers. The whole place buzzes with the exuberance of an east end market. Lights, colour, laughter and booze reel around the hall in a ready chorus.

The smallest of the craft brewers to the biggest backed breweries in the world come together here, camaraderie and celebration of beer unites all. Brew//LDN kicks off the festival beer calendar and sets an incredible standard. Long out into the spring, summer and beyond many of these brewers will set up shop across the U.K bringing their brightest and best. They pour their core offerings, special releases and those hard to find beers in communion with welcome glasses. In an ever expanding industry, friendships are struck, maintained and renewed here. Spirits are high, while the beer flows like wine, to quote Lloyd Christmas.

Throughout the day, articulate and engaging guest speakers, eager to enthuse about their ideas, processes, and produce give lectures and round table events to captivated audiences. At night, DJ Artwork pours pints from the taps in front of his decks for the dedicated revelers on the dancefloor. The food court takes up the lower floor, full of stodge and fancy surprises to satiate the beer filled bon vivant anytime of the day.

As the public session begins, a fresh crowd of enthusiasts enter the festivities. They mix and explore, finding friends and favorites within every row of the brewers wares. Bringing new life to the bon amie by the beer taps.

Craft beer festivals have moved on. Beards and beanie hats have thinned out a bit. Craft beer is no longer niche. It is not the preserve of a dedicated cliche in turned up skinny jeans, no socks and severe haircuts. Quality, exciting and satisfying beer crafted by brewing devotees is part of a complex community of diverse tastes, it is now a solid part of the furniture. Craft beer rising naturally had to give way to Brew//LDN, it’s the way it goes, nothing is lost.